Land grab, a central pillar in turning Sri Lanka into a Muslim state

This (The Muslims of Sri Lanka) is a must read indeed for anyone who has any hope for a peaceful, prosperous and pluralistic Sri Lanka. The subsequent parts of the article which will appear in future must also be read. The well organised, intensive and sustained land grab by Muslims in Sinhala dominated areas have been in operation since mid 70s as the writer rightly highlights. I find this subject very interesting as a guy who has witnessed this phenomenon since my early teenage years in my birth place in Central hills and later in many parts of the country while engaged in my professional life. This land grab, often supported by funds from the Middle Eastern states, is so sustained and intense that in many instances entire villages become Muslim in a couple years time leaving only the Buddhist temple which also vanishes shortly afterwards. Though the intensity of it is not confined to a particular region, the eastern district of Ampara has been targeted vigorously. This is demonstrated by the sheer number of Sinhala villages that have disappeared in last few decades.

Tamils in Northern province were lucky and escaped this tsunami type of Muslim colonization thanks to 30 years long war. However, Minister Rishad Bathurdeen seems catching up that lost time unleashing a massive Muslim settlement schemes both in Wilpattu and other areas in North and East.

If unchecked with a strong political intervention by a future patriotic government, the consequences are pretty obvious. This political intervention should certainly accompany a robust population control mechanism aimed at Muslim community, which seems almost impossible given the sheer opposition it will generate locally and internationally. But someone must do it. Some have, of course, done it. The case in point is Singapore.
Posted by Rebel at 3:31 PM No comments:

Give back the country to Ranil! 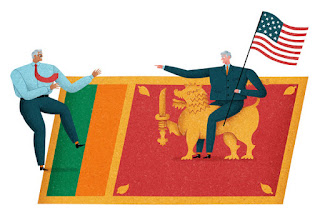 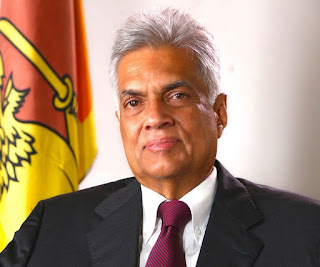 Sri Lanka would be stable under Ranil Wickramasinhe only as it was before Sirisena and Mahinda hora fucked all up. We need Suddas led by Americans to run this country. Ranil ruled the country very successfully with the support of Suddas until last October. We are all confident that Ranil will again get that chance pretty soon. We will again be roaring past all other countries in the region with a massive development drive as Suddas will again give the country back to Ranil in a silver platter.
Posted by Rebel at 10:43 AM No comments:

DJ’s appointment to Russia as ambassador! What is Sirisena up to?

Dayan Jayathilake (DJ) is now Sri Lanka's new ambassador to the Russian Federation. DJ is indeed an opportunist to his bones. He is equally very cunning. So there should be something big forthcoming. Sirisena is a sinking ship and there are signs that rats would soon start jumping to sea. It is true DJ is at odds with what he calls "Alt Right" in Gotabhaya Rajapaksha's (GR's) camp which includes, according to him, racist Buddhist monks and ex-military guys such as Admiral Sarath Wijesekara. Therefore, he is now openly criticising GR's candidacy. Has he abandoned MR and GR who undoubtedly enjoy a huge popularity among people and joined a sinking ship?

Either DJ simply wants to add another colourful feather in his cap as a diplomat and a "political scientist' in his twilight years in the former domain becoming the Ambassador to Putin's Russia considered be the biggest force against the West's neo-con hegemony in the world or Sirisena is still a force to be reckoned with despite his zero popularity among people. The most likely scenario is the latter assumption. In other words Sirisena is again likely to be the "Common Candidate" in the upcoming Presidential election. This may again be a game plan by the West and India to block MR and GR as there is no one in sight to compete the latter.
Posted by Rebel at 9:55 AM No comments:

JVP- a handy proxy of Neo-Cons

We had an opportunity to witness something unprecedented in Sri Lanka's political history during the campaigning period of the recently concluded Local Government election though it went largely unnoticed amidst the heat of the campaigning. JVP found a section of supporters who would have otherwise been the least likely bunch of supporters, had the party's leader was the current leader's predecessor. We could see some of the ardent lackeys of the Western Imperialists who included blue blooded capitalists, Eelamists , sworn anti- Sinhala Buddhists and some NGO figures were either openly campaigning for JVP or praising JVP as a clean party or a "crusader against corruption" for which worth voting. They campaigned for JVP in various public forms such as media which included electronic, print and social, press conferences and public meetings.

JVP was portrayed as an alternative to the "Hora Mahinda & his cronies" and "Corrupt UNP & SLFP". How could the capitalists and the lackeys of the Western imperialists become the supporters of JVP, a radical Marxist party which staged two bloody armed uprisings and was a staunch anti-imperialists and anti-Indian expansionists party?

The fact that JVP became a proxy of the Western Imperialists and the Indian Expansionists under its current leadership is never a secret to anyone who follows Sri Lanka's political developments. JVP played a decisive role helping the West and India to end the former president Mahinda's rule and installing the West's and India's puppet, the current Yahapalana regime. The West and India knew that their puppet regime was becoming increasingly unpopular by every passing day. They knew that Mahinda's popularity was largely intact and his newly formed party-SLPP was to make impressive electoral gains in the near future. On the other hand their lackey UNP's popularity was nose- diving under the leadership of Ranil Wickramasinhe resulting in a substantial loss of its traditional voter base. This scenario inevitably makes the Joint Opposition (JO) led by Mahinda to gain substantial ground electorally. The best way to deprive those gains is to ask people to vote for JVP as they know very well that JVP would never work against the West's and India's interests.

What we witnessed in the form of post-election comments by some prominent Yahapalana figures who included Mangala Samaraweera, Rajitha Senarathne, Sambanthan, Anura Kumara Disanayake, Champaka Ranawaka and some prominent NGO figures claiming that SLPP was actually the loser as the combined votes against it was greater than what It gained was a result of the ground work made asking people to vote for JVP. In other words JVP has metamorphosed itself to a handy proxy of the Neo-Cons. It is being used to destabilize Sri Lanka finally aimed at Balkanizing it. The most tragic part of it is that this reality is still unknown to many of its supporters, a section of gullible poor rural Sinhalese Buddhists whose brothers, sisters, fathers and mothers made supreme sacrifices to preserve the territorial integrity and the unity of their motherland. They will never know that their beloved party is hugely contributing to a greatest betrayal of their loved ones' supreme sacrifices!
Posted by Rebel at 2:10 PM 1 comment:

What would be the next move by the foreign backers of the Yahapalana regime?

It is interesting to see the powerful foreign patrons of the Yahapalana regime namely the Western Imperialists and the Indian Expansionists are now up to with the unexpected massive electoral defeat suffered by their puppet regime in Sri Lanka. Since there is virtually no chance of Yahapalana regime making any electoral victories at the upcoming Presidential and Parliamentary elections ,paving the way for Pohottuwa being the sure winner, the most likely course action on the part of its foreign patrons would be to physically eliminate the key figure behind the Pohottuwa's victory, Mahinda Rajapaksha. Eliminating the key figures, especially in the Third World, who are not prepared to follow the whims and fancies of the West has been the tried and tested modus operandi on the part of the West. The West and India thought that they got rid of the former president Mahinda politically with the installation of their Yahapalana puppet regime in 2015. But they soon realized that they were wrong having seen the massive public support that Mahinda was still enjoying despite the fact that it took full three years to prove it electorally.
In an earlier post of mine in June 2015 before the General Election I suspected that their prime target would be Gotabhaya Rajapakasha. With the new turn of events, Mahinda would be the most likely immediate target. It is up to Mahinda and the fellow patriot Sri Lankans to protect him with this very real danger.
Posted by Rebel at 1:31 PM No comments:

The Western Imperialists have been scoring one after another victory in Sri Lankan front in past two and half years' time. They are poised to score their biggest victory soon: changing the country's constitution to suit to achieve their imperialist agendas.

The speech titled "The new Constitution – a neo-colonial project!"  made by Dr. Tamara Kunanayagam at the 'Eliya' forum that took place a few days back in Boralesgamuwa is really enlightening and eye opening. Among those who talked at the event included the former Defense Secretary Gotabhaya Rajapaksha, Dr. Dayan Jayatilake, Ven. Madagoda Abayatissa,  Rev. Father Wimal Thirimanna ,Rear Admiral Sarath Weerasekara and Major General Kamal Gunaratna. The piece by C.A. Chandraprema of 'The Island' on the event has also got some interesting facts.

All the speeches made at 'Eliya' including Dr. Tamara Kunanayagam 's are available on YouTube. Some of them are as follows: 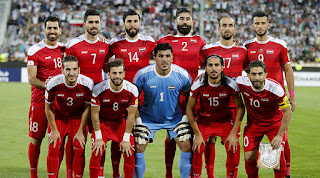 Syria's heroic soccer team's stunning performances in their quest to qualify for FIFA' s world cup to be held in Russia in 2018 seems a slap on the face of the Western Imperialists hell bent to Balkanize Syria to achieve their neo-colonial agendas. These victories in the sports arena by the Syrians comes close on the heels of Syrian army's recent heroic victory in Deir ez-Zor against ISIS almost sealing off the West's sustained efforts to break Syria in to pieces.  Of course, Syrians would have never been able to achieve their military victories, If Russia and Iran didn't throw their lot behind with them with the much needed military, moral and political support.  The RT's this piece is well written mixing politics and sports.

"In September 2017, against all the odds, the secular Syrian state survives, as a symbol of never, ever say-die resistance to the rapacious global hegemon. How appropriate it was that the Syrian football team's great result in Iran came in the same week as the Syrian Arab Army, along with its loyal allies, ended the ISIS siege of Deir ez-Zor".
Posted by Rebel at 10:34 AM No comments:

Rebel
rebel a person who is opposed to the political system in their country and tries to change it using force, or a person who shows their disagreement with the ideas of people in authority or of society by behaving differently: verb [I] 1 to fight against the government or to refuse to obey rules, etc: 2 to react against a feeling, action, plan, etc: